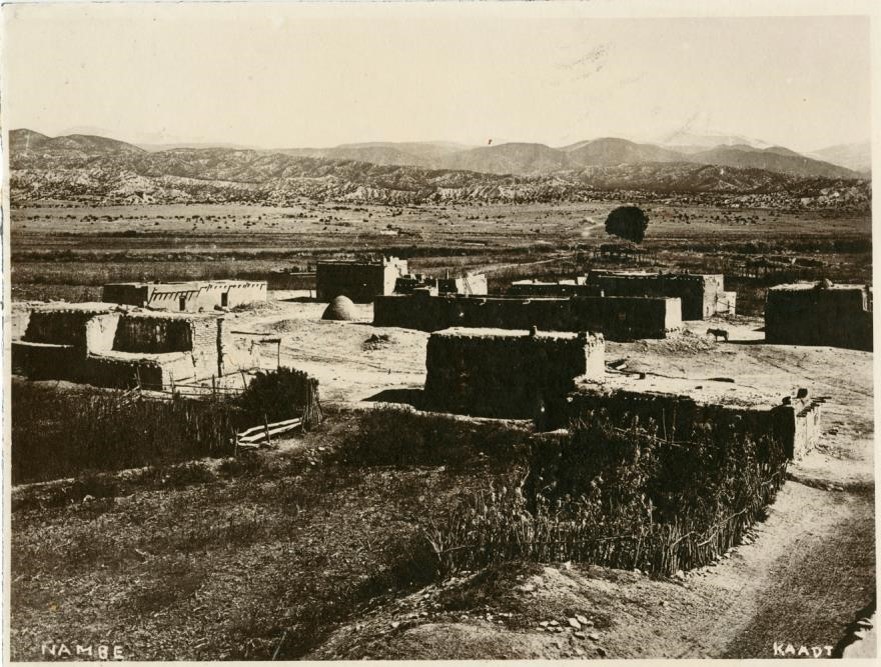 Nambé Pueblo: The Past, The Present, The Future

Nanbé Owingeh – Nambé Pueblo (The Place of the Rounded Earth) 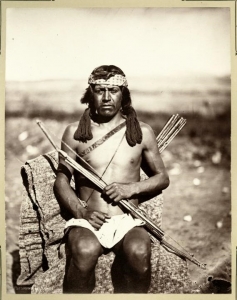 The Pueblo of Nambé, or Nanbé Owingeh, is one of the six Tewa-speaking pueblos of the northern Rio Grande region. It is located about 15 miles north of Santa Fe, at the base of the Sangre de Cristo Mountains. The name is a Spanish interpretation of the Tewa word “nanbe’”, which roughly translates as “rounded earth”, and “owingeh”, which translates to “pueblo” or “village”. Prior to the arrival of Spanish explorers in the early 1600’s, Nanbé Owingeh served as a primary cultural and religious center for the northern New Mexican pueblo communities, and has existed at it’s current site since the 14th century. As such, it was of particular interest to the Spanish in their efforts to destroy the indigenous cultures of New Mexico. With the arrival of Spanish conquistadors, residents of Nanbé Owingeh were forced to start paying taxes with cotton, crops, and labor. Catholic missionaries also came into the area, threatening Native religious beliefs. They renamed pueblos with saints’ names, and the first church in Nanbé Owingeh was built in the early 1600’s. The Spanish introduced new foods to the native communities, including peaches, peppers, and wheat.

In 1620, the King of Spain ordered the New Mexico pueblos to choose civil officials by popular vote to govern each pueblo. The tribes adopted the new form of government and integrated it into the traditional systems. The right of each pueblo to self-govern was subsequently recognized by the crown, and later, by Mexico and the United States. The state of New Mexico and the federal government have repeatedly recognized the status of the pueblos as sovereign nations. 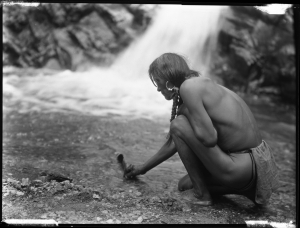 The mistreatment at the hands of the Spanish colonizers eventually proved to be too much, and the people of Nanbé Owingeh joined forces with neighboring Pueblos to force the Spanish out of New Mexico during the Pueblo Revolt of 1680. Led my a man named Po’Pay, a medicine man of Ohkay Owingeh, it is estimated that 400 Spanish were killed during the 11 day rebellion, and the remaining 2,000 Spanish settlers were driven out of the province. New Mexico was no back in the hands of it’s rightful owners, and the people of Nanbé were free to practice their traditional ways of life uninhibited. The retreat of the Spaniards did not last for long however, when in 1692, Don Diego de Vargas led an expedition back into New Mexico and reclaimed Santa Fe under Spanish rule. Peace between the Spanish and the Pueblos was promised, and the Pueblos were able to gain a measure of freedom from future Spanish efforts to eradicate their culture and religion. The Spanish also issued substantial land grants to each Pueblo and appointed a public defender to protect the rights of the Indians and argue their legal cases in Spanish courts. The Catholic priests who returned to New Mexico did not again attempt to impose a theocracy on the Pueblo people who continued to practice their traditional religion.

As with most of the other northern pueblo tribes, land and water rights have figured as the most critical issues facing Nanbé Owingeh. The tribe petitioned the Indian Claims Commission for the return of 45,000 acres bordering the Santa Fe Ski Basin they claimed were illegally taken from them by Santa Fe County in 1905 and declared part of the National Forest. After painstaking legal work, tribal counsel won a favorable ruling from the commission, which then began proceedings to determine the fair-market value of the land at the time of its confiscation. The tribe, however, rejected the government’s offer of a cash payment in 1976, holding out for the land instead. This hope has yet to be realized.

After a gap of over 300 years, the All Indian Pueblo Council began to meet again in the 1920’s, specifically in response to a congressional threat to appropriate Pueblo lands. Partly as a result of the Council’s activities, Congress confirmed Pueblo title to their lands in 1924 by passing the Pueblo Lands Act. The United States also acknowledged its trust responsibilities in a series of legal decisions and other acts of Congress. Still, especially after 1900, Pueblo culture was increasingly threatened by Protestant evangelical missions and schools. The Bureau of Indian Affairs also weighed in on the subject of acculturation, forcing Indian children to leave their homes and attend culture-killing boarding schools. Since the late nineteenth century, but especially after the 1960s, Pueblos have had to cope with onslaughts by (mostly white) anthropologists and seekers of Indian spirituality. The region is also known for its major art colonies at Taos and Santa Fe.

The tribe was the first pueblo to accept HUD assistance for the construction of residential buildings, doing so initially in 1967. In 2004, the tribe received $662,207 from HUD to be used for housing construction and management. Tribal housing continues to be comprised of traditional homes, some as old as several hundred years, as well as contemporary structures. 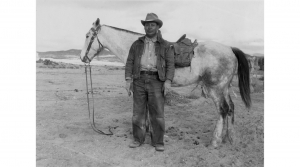 Today, Nanbé Owingeh is still known for its beautiful public ceremonies and traditions, strong agriculture, traditional textiles, and pottery production. Due to illegal acquisition of lands on behalf of the United States government in the 19th and 20th centuries, the Pueblo is almost completely surrounded by non-Indian towns, most of which are Hispanic. It is estimated that Nanbé Owingeh is home to approximately 1,100 members, most of which are nominally Catholic, but still hold on to and practice our traditional religion and customs. The Pueblo encompasses nearly 20,000 acres consisting of towering cottonwoods, juniper, scrub oak and an occasional outcropping of sandstone.  The Rio Nambé, whose headwaters begin high in the mountains, 5 miles to the east of the reservation boundary, flows through the Pueblo and eventually feeds into the Rio Grande. 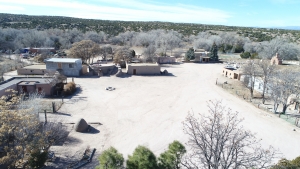 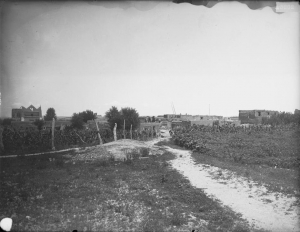 Once, most people lived near the Buupingeh. HUD housing policies in the 1960’s and 1970’s required a new house to replace an old house. This meant that existing housing had to be abandoned or torn down. The new houses were built away from the Buupingeh, as well as the acequias and traditional water sources, which led to acequias falling out of use. At the same time, cultivation around the Pueblo decreased. These policies followed the general trends in American urban planning. Many of those trends have had negative consequences on American cities, suburbs, and rural communities, too. Deciding how and where people should live and work has long term effects on a community. 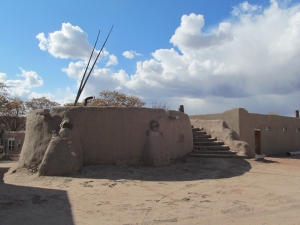 The Kiva (or Te’i in Tewa) is part of the balancing of life forces with the underworld and the sky. This particular Kiva came into being near the time of year-round residence in Nanbé Owingeh.

This photograph from the 1900’s show the ways water has flowed and shifted earth around the Kiva, creating the need for steady renewal of the exterior by rebuilding embankments as they erode, adding buttresses, periodically plastering the sides with fresh adobe, and stabilizing the stairs. 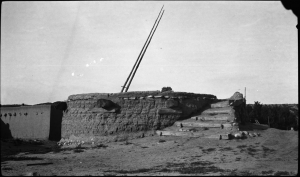 The Kiva pre-dates the first church in Nanbé Owingeh. For over 800 years, the community has maintained the Kiva even whole other aspects of life at Nanbé Owingeh have changed. 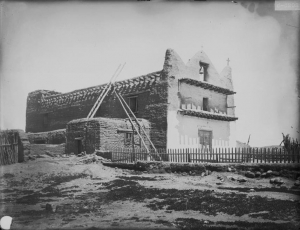 The earliest church here at Nanbé Owingeh was built in 1617 after the Spanish established a mission in 1613. This church was destroyed in the Pueblo Revolt of 1680.

A new church was built in 1725. One of the beams bore the inscription: The Lord Governor Don Juan Domingo Bustamente built this church at his own expense. Year of 1725. A pitched roof was added around 1900, which had collapsed by 1908. 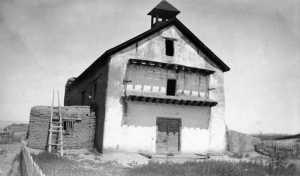 In 1915, Santa Fe artist Gerald Cassidy and his wife Ina Sizer Cassidy reportedly received permission to remove the fallen beams, corbels, and the Miera y Pacheco painting of the Immaculate Conception from the collapsed church, which they used in the construction of their home in Santa Fe. 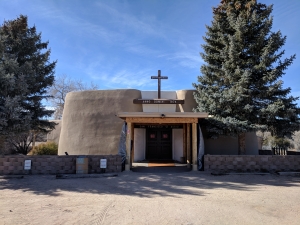 The St. Francis Women’s Club organized 14 years of fundraising to build a new church. 4th of July dances were one way of funds were raised, an have since been held annually at the Nambé Falls Recreation Area. Dancers from other pueblos came to help out with the events, and people from Nanbé Owingeh helped out with other communities’ fundraisers. In 1974, enough funds were raised and the present church was designed by Architect Allen L. McNown. It was dedicated in 1975. 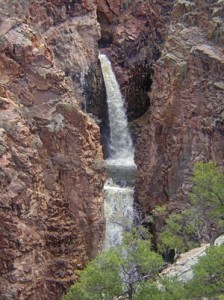 The Pueblo of Nambé is home to one of the most spectacular natural waterfalls the Southwest, and its waters have been used ceremonially by the people of Nambé since time immemorial. In 1976, as part of the San Juan Chama project, a dam was built above the Nambé Falls to supply irrigation water to the Pojoaque Valley. Shortly thereafter, the Pueblo opened the Nambé Falls Recreation Area to visitors for camping, hiking, and fishing. 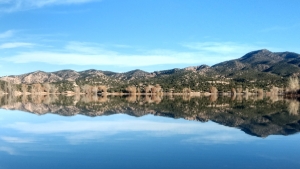 Nambé Pueblo is a registered National Historic Landmark, and is a major tourist attraction. The Nambé Lake offers outstanding fishing opportunities and the Nambé Falls Recreation Area is a popular summertime location for camping, picnics, and organizational gatherings. Coupled with the beautiful waterfalls, the scenic rock formations that decorate the area are incredibly popular with tourists and movie makers alike. As such, the Pueblo of Nambé continues to invite film producers to consider filming movies on its lands. 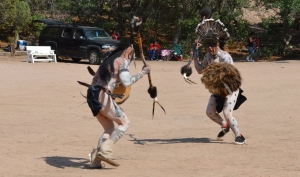 The Pueblo hosts a number of ceremonial dances that are open to the public. One of the most popular is the Nambé Falls Independence Day Celebration, which has been held annually on the 4th of July since the 1960’s. Along with dance groups from other Pueblo’s performing, it is at this event that one may be lucky enough to witness Nambé Pueblo dances that are seldom performed, such as the Spear Dance and the Buffalo Dance.